A downloadable microfiction for Windows, macOS, and Linux

[This is the result of the Secret Sneepsnop 2017, a secret santa type event on Mastodon. This is from @BatElite@computerfairi.es to the also fine @thegibson@hackers.town]

On an auction site a few weeks ago you stumbled across a bewildering thing:

The pictures show the rover to be grey-black with four wheels. A lot of room is spent on a keyboard and a CRT monitor, almost like someone just built a chassis onto a regular computer. It also has plastic stands like on the back of keyboard that are long enough to take it off its wheels. This is also the position it is in on most of the photo's since the wheels will just roll the thing around otherwise.

The rather surreal auction page goes into lurid detail about the origins of the thing. Apparently a few small software and hardware companies came together in the shared delirium to explore space. No mention is made on how they'd do this or to what benefit. Instead an immediate effort was made to produce a rover that would do all sorts of cool things (The front of the case has a large hole in it where these thing would go. They did manage to cram a camera in there though. ) and with stunning forward-thinking design.

What is described of the process doesn't suggest that there was any supervision on making the thing. Things definitely got done, and the rover supposedly can drive and do a whole lot else. There is no way in hell this is real.

...But you were VERY drunk and oddly fascinated so you put in a bid.

Opening the box, it's definitely somehow real, straight from some weird place from the 80's. Not only is the manual present, but a few floppies as well as some electronics and bits of plastic that would have made up the front had they been completed.

You've put in on your workbench and you've done up the stands. You've plugged in the power cord and stuck the additional required 14 AA batteries in. Goodness knows how it'd ever run independently in space.

Now let's see what it does.

[Gravity Rock might need to be reset (R) once before you can play it properly. I'm not sure at this point, as the issue seemed to resolve itself on my end.]

[I can only compile this for Windows myself. The source folder is for Game Maker Studio 2.]

Unzip this somewhere where it won't clutter up important things, then run RoverSnop.exe

The RoverSnop folder contains the project source, should you have chosen to download it. 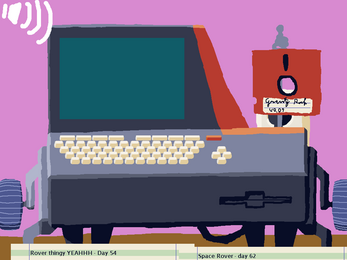